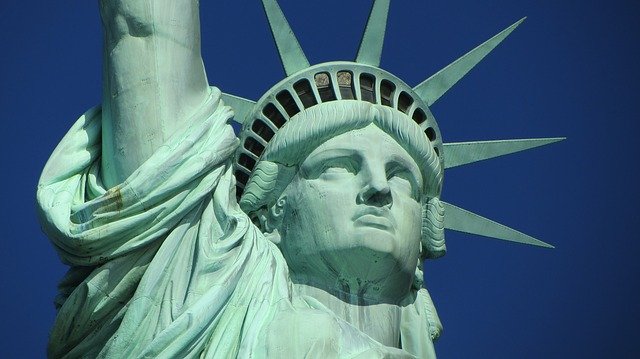 A symbol of hope. A symbol liberty.

A non-American randomly asked me why the the statue of Liberty was green. I told him erosion. He said “what?”

I told him, “You see… from what I know, the statue of Liberty is made out of copper. So when it first came as a gift from France, it must have been shiny brown like the color of a penny. But as time passed, the copper eroded due to the exposure to the air. So the statue naturally turned green as we see today.”

The guy thought I was of bullshit and said the statue was make out of concrete. I told him that the last time I checked, concrete didn’t come in that greenish color and a fight was about to pursue until our beautiful bartender stepped in and cooled the situation.

Never thought that a simple talk about the symbol of the free world can result in a fight. I guess we do learn something everyday no matter how uncivil it can be.

I was ready to defend myself but was taken in with how easy it is to trigger some people these days. It’s just bar talk but I have to remember that I still need to be careful. Maybe the guy just didn’t like me but that doesn’t matter. People are drunk and some people do really stupid things when drunk. I wasn’t even done with my first beer and yet I was ready to roll, which is the stupidest thing to do. My hands were shaking not because of fear but because of the adrenaline pumping through my body. I love that feeling because It makes me feel alive and young. I have to admit, I haven’t felt that feeling for a long time and I missed it.

If it wasn’t for the sweet talk and flirty touch of the beautiful bartender, things may have gone south real fast.

Have to give respect beautiful women who can easily diffuse a stupid situation between two stupid men doing bar talk. All in all, I think her beauty and sweet talk did most of the calming down. Women, not man, are the wisest living beings of all. haha

Btw, as stupid as this sounds, I wanted to further the conversation with the difference between corrosion and rust but the guy was too stupid to know the difference.

For those of you reading this, rust only occurs in materials that iron (Iron oxide) when it is exposed together to oxygen and moisture.

Corrosion on the other hand is a chemical reaction that occurs in metals such as copper, brass, bronze, and etc. This chemical reaction changed the color of the Statue of Liberty as it was exposed to the natural elements (air) over time.