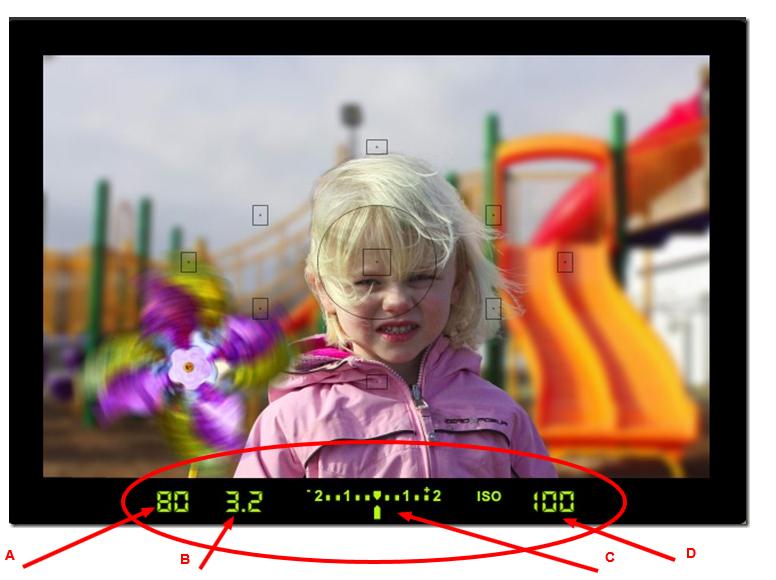 Now it is possible to learn the basics of photography without buying a nice dslr camera.

The following simulator and image below represents a viewfinder from one of Canon’s dslrs that will explain the basics of manual photography that can be done with through a simulator.

A free site called Camerasim.com offers its visitors to a chance to learn and understand shutter speed, aperture (f-stops), and ISO while viewing a picture of a girl in a park through a viewfinder of what looks like a Canon Dslr.

You can try the simulator on Aperture priority mode (AV mode), Shutter priority Mode (TV Mode), or Manual mode. These three modes is what differentiates slrs from most compact cameras because it requires the photographer to choose the appropriate shutter-speed, aperture, and ISO.

With the image shown above, let’s explain what the number means.

For this image, the photographer chose a shutter speed of 1/80 seconds (80 as shown in the viewfinder). Every number seen in through the viewfinder would be made into a fraction… For example if you have a number as 250, you would interpret that as 1/250th of a second. In this shot, 1/80th of  second is slow enough to show some motion for the toy the girl is holding. This also controls the time of the amount of light that is received so if I shot this picture at 1/500 secs, the toy would look still but the image will be underexposed (darker) because not enought light would pass through.

Please note that aperture also controls the depth of field… so if the aperture is wide open as seen in the shot above at F3.2, then you can produce some nice bokeh (blur, which is seen in the background). If you shot at an aperture of F16, then the background will not be blurred. Try it!

In almost every slr camera, a light meter would be present and can be visible through the camera’s viewfinder. The light meter bracket is a referential meter that shows how bright or dark a subject would be. We would like to have the meter right in the middle most of the time. Remember, the shutter speed as mentioned above controls the time of light that is received. Therefore, if the light meter indicates the picture is too bright, we should increase the speed of the shutter to balance the amount of light received. If the light meter indicates the pictures is too dark, we should decrease the shutter speed to balance the lighting for that perfect shot.

The ISO number indicates the sensitivity of the sensor. ISO stands for International Standard Organization. Back in the day, it was ASO, or American Standard Organization but that’s ancient and non-existent to this day. Anyways, the higher the ISO number the more sensitive the sensor becomes. A high ISO is very useful for low lighting / night shots, but the higher the ISO, the quality of your image reduces because of digital noise. For the photograph above, which was taken in what looks like a sunny day, an ISO of 100 is just enough when taken with a shutter of 1/80th of a second and an aperture of F3.2 for some motion in the toy and some nice depth of field.

If all of this sounds like rocket science, try playing around with various settings from this site. As long as you understand the shutter speed, Aperture, and ISO, you can take many great shots.